Audelle’s Story: If Only They Would Change Before It’s Too Late 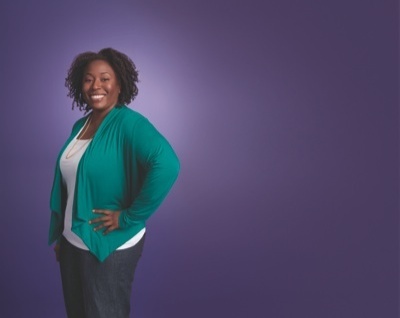 Allow me to introduce myself. I am a reformed junk food addict. You have read about people like me in science articles and more recently in the mainstream press. I am one of the legions of Americans who have most likely eaten their way into the diagnosis of type 2 diabetes. Sharing my story is part of my healing. The truth hurts and reading my story in black-and-white hurts more, but I have hope that my story may heal you or someone you love.

I understand that a lot of people of color live in the so-called urban food desert. That’s not where I come from. There are plenty of middle and working-class African Americans who have access to good food and are still getting diabetes. And since I can’t fix the food desert, I would like to address myself to the people who could spare themselves this diagnosis if only they would change their behaviors before it’s too late.

There is no history of diabetes in my family. My people come from the islands and ate mostly produce before they moved to this country. Being an open-minded person and embracing her new culture, my mother let me have Pop Tarts and whatever I wanted from the pop culture. Our teeth turned out fine so we were not good examples of the “don’t-eat-sugar-because-it’s-bad-for-your-teeth” party line. But I am diabetic and have a close family member with fierce sugar addiction, to the point where she can’t go through most days without popping candy in her mouth. As a teenager, I experienced hypoglycemia (low blood sugar) and all the uncomfortable warning signs the body sends when it’s trying to prevent a coma. Because of Suppers, I now know that I was on a long roller-coaster ride of ups and downs, overworking my pancreas on a daily basis.

There are lots of reasons why people of color are at greater risk of developing diabetes, and some of them are biological. In my case, I was the first generation in my family to be hit suddenly by a storm of processed foods and the advertising that makes it so lucrative to manufacture and hard to resist. It seems so normal to eat these foods. There was no decision to be made between fresh vegetables and chips, sweets, or soda growing up. While all options were available, I consistently made poor decisions. However, I experienced none of the classic symptoms of diabetes (increased thirst, urination, etc.). I had no pre-diabetes diagnosis or even cautionary conversations with my doctors. It’s no wonder that I lived in denial for two years after my diagnosis. When the doctor came back with the test results and said, “Well you know you have diabetes. How are you managing that?” I just swatted him away like an annoying mosquito. I don’t think I even filled the Metformin prescription.

By the time I landed in the ICU with life-threateningly high blood sugar a few years later, I had already passed the point where treating with diet, exercise and just oral medications would be enough and moved right into insulin-dependence. I spent four days in the hospital stabilizing my blood sugar. I was terrified. Terror works in favor of the people selling the drugs. And they lay it on really thick: “You’ll go blind, we’ll be amputating your feet, and you’ll die young!”

For an insulin dependent diabetic, the current protocol is to cover every carbohydrate you eat by injecting insulin. Each evening, I take a dose of “background” insulin, the amount determined by the physician. Then every time I eat, I inject a different kind of meal-time insulin to manage my response to food. That means 15 minutes before I ever put anything in my mouth, I need to know what and how much I’m going to eat. This is a pain in the ass, to say the least: Do I decide before I eat that I’m going to “overeat” and take the insulin to cover it? What if that dish wasn’t as good as I thought it would be so I don’t have seconds. I took too much insulin so I need to eat something. What if I’m “being good” and dose accordingly, but the dessert menu gets the best of me? Then I’m on the rollercoaster again – and chasing food with drugs is not a good plan. Mind you, one third of the country is headed for this disease and most of them aren’t as intelligent and practical as I am. Thank God for the internet. That’s where I was able to sort out and troubleshoot a lot of my issues myself.

My blood sugar numbers started improving as I became a vegetarian. But when my numbers got a lot better, my pharmaceutical company sent me a letter asking why I wasn’t following doctor’s orders and refilling my prescriptions on time. I told them that my numbers were better on less medicine, which I guess is something they don’t hear very often. When I was sticking to a nearly 100% raw vegan diet, I didn’t need to take meal-time insulin at all, and I even went down on my “background insulin”. Seriously, wouldn’t you think somebody would tell you this was an option before threatening you with amputation if you don’t take your drugs?

The day I was introduced to Suppers, I was at an American Diabetes Association event. I was transitioning to a vegan lifestyle. I was also new to the area, and open to all options to deal with my diagnosis. I was also still really annoyed with my doctor, who could clearly see my numbers were better on a vegan diet and still wanted to add a third kind of insulin to my daily routine. So there I was, at an ADA event, with this perky woman offering me chili for breakfast. The place was loaded with diabetes vendors and I was waiting to hear how much this chili-for-breakfast program was going to cost me. “It’s free to users,” she said. “Excuse me?” “The program. It’s free to users.”

You have to understand. I’m from the Bronx, New York. “Free-to-users” conjures up images of being maneuvered into a back room to kill me. At the very least, I was sure they wanted to sell me something.

“No, there’s no charge. You just pay for what you eat.”

No charge makes no sense to me. I have an MBA.

“You’re OK with me eating vegan?”

I had to see if they were serious so I started going to Suppers. I waited for the ax to fall. It never did. Four years later, I’m on the Suppers Board of Trustees. It worked so well I had to give something back.

You can’t be stupid and manage this disease well. The apps make it easier, but there is no substitute for planning. Even with the apps, you never get off the tight rope. You need mentors. And apps do absolutely nothing to deal with the devastating impulses to eat sweets when your sugar goes too low. The impulses are – I learned in the haven of Suppers – just my brain’s way of saying, “I’m out of fuel; feed me now or die.” I think that’s why so many people with diabetes end up depressed and fed up. Also, it’s really scary.

For me, the fear gave way to frustration and then also fascination. After I got my continuous glucose monitor, I could see how stress, exercise, and emotions affect my blood sugar. I could also see how my body handles different sources of carbs. A banana I could manage with insulin. A Snickers bar spiked me in ways I couldn’t control. I ended up taking too much insulin when I didn’t respond to what I thought was the right dose. Imagine, I was giving myself life-threateningly low blood sugars for a candy bar. Nobody can tell me candy isn’t addictive. The diabetes educator kept suggesting carb counting, but that’s not where my answers were. It was all in my own trial and error. I had to experiment and track my numbers.

When my numbers got better, wouldn’t you have thought the doctors would want to know how I did this? No, the prescription pad was on auto-pilot. Finally, I had to change doctors because I was tired of getting the notes from the pharmaceutical company.

The professions that deal with diabetes need to listen up. Their terror tactics didn’t move me to the part of my brain that makes wise choices, quite the opposite. Before Suppers, it was very easy to slip into this kind of logic: “I’m going to end up with no feet and blind so I might as well eat some candy.” The transition wasn’t easy, but now I’m at peace with food choices. I choose life. I’m eating for health. The food tastes good now (it took a while, that’s why you need support). I’m even growing some of my own vegetables! I look forward to meals instead of dreading the complications that may come from them. People should know they have a choice – fight the disease or feed the disease.

So where am I now: down four dress sizes, 30 pounds, and taking one third of my original dose of insulin. My family members are drinking green smoothies and even experimenting with breakfast chili to help with chronic constipation. Some are even asking me for advice on what foods can treat their symptoms. My brother-in-law still teases me, sending me pictures of bacon wrapped in pancake batter – I respond with pictures of fruit and my garden.

I have a life worth living! And I found it surfing the internet and cooking in the kitchens of people who are dedicated to offering alternatives.